I Pugni in Tasca (Fists in the Pocket)

We here at 106th Street love cinema. In fact, if it weren’t for cinema the 106thstreeters would never have met, forged our way back across country, and returned our family names to their proper North American East Coast origins. Like many here in the US of A, our familial roots come from far, far away (be it by choice or by force). That’s why the Italian film, I Pugni in Tasca, reminds us here in this pre-pubescent country, that some our relatives ran as fast as they could from their homelands and (often) families.

Without giving away any plot (because you should watch this film, pure and unsuspecting), we were literally left dumbstruck when the credits rolled at the French Institute : Alliance Francais (FIAF) Florence Gould Hall Theater. This 1965 film, and first film by director/screenwriter Marco Bellocchio, stars the young and handsome Lou Castel and the gorgeous Paola Pitagora as brother and sister in a family with some issues. Funny, creepy, intelligent, philosophical, and cutting-edge (they filmed this in 1965, home of the Pope, Italy), we were reminded that the seemingly creative brilliance of today has mostly just riffed off of what has come before. Ignorance is bliss, until you realize you’ve been an ignoramus, and then it sucks.

The 106thstreeters are picky about where they see cinema. And thanks to some great venues here in NYC, we get the opportunity to see films that are rarely screened. FIAF, Film Forum, IFC, Paris Theatre, MoMa, BBQ Films, the Ziegfeld, Maysles Cinema, and Rooftop Films are all mainstays for the 106thsreeters. Not only because they have the films we want to see (and are willing to shell out the dough for), but they provide the proper atmosphere to give these films the attention they deserve. 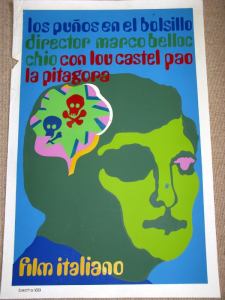