The other day, walking down 14th Street, there was a noise. A very familiar noise. But not to New Yorkers’ ears. There were brass instruments, there was a drum, and there was singing. It was a beautiful sound, that after a few trips to New Orleans, you start to instantly recognize. Getting closer, the band actually looked familiar. It was the Treme Brass Band whose amazing performance we had caught at the Candlelight Lounge a few weeks earlier. It was all a big show for the media to promote the DVD of the first season of the excellent HBO series Treme. But there were a handful of us enjoying this rare outburst of spontaneous joy on the streets of New York. And it worked, because I plucked down thirty bucks and had the cast sign the DVD box while everyone munched on complimentary Hubigs Pies and king cake. 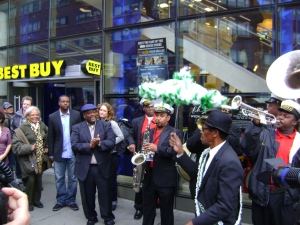 Dancing and playing (New Orleans style) in the streets of NYC. C. Nelson, 2011. 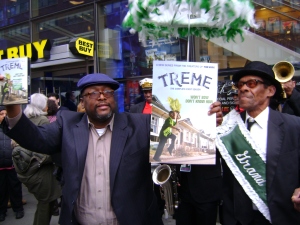 Exploring, cooking, drinking, riding the subway, bowling...a writer and editor based in New York. I'm a city lover who edits the blog for EuroCheapo, writes for ShowTickets.com, explores for Spotted By Locals and has worked at various under-the-radar companies like Google. Feel free to drop a line at across106thstreet@gmail.com or on twitter at @across106th.
View all posts by Craig Nelson →
This entry was posted in Heading Out in the Evening and tagged brass bands, jazz, live music, New Orleans. Bookmark the permalink.