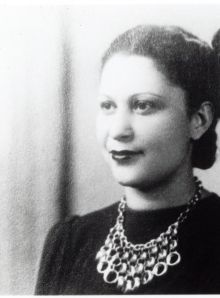 When you walk Spanish Harlem, you are never too far from poet Julia de Burgos (1914-1953). From Manny Vega’s tile mural of her at 106th Street (between Lexington and 3rd Ave.), to the EHBCC banners with her image hanging from light posts strewn about the neighborhood, to the cultural center named in her honor, and most recently, to the section of 106th Street renamed after her, de Burgos’s presence is felt daily. She was and still is a neighbor in Spanish Harlem.

Born in Barrio Santa Cruz, Carolina, Puerto Rico on February 17, 1914, de Burgos literally fell sick on the streets of Spanish Harlem and died at a nearby hospital on July 6, 1953.

Only 39 years old when she died, the work she left us makes one think about what she took with her to her death. In the short time she was alive, she was able to: win scholarships to attend University High School (Esquela Secundaria, Universidad de Puerto Rico) at which she graduated early; attend and graduate from University of Puerto Rico with a teaching degree by age 19; marry; work as a teacher; work as a writer for a public radio show for kids; divorce (three years after the wedding); work for political freedom and social justice in Puerto Rico; publish two books of poetry (Poem in 20 Furrows (1938) and Song of Simple Truth (1939); her third, The Sea and You (1954) was published after her death); go to New York; move to Cuba with her lover; take graduate courses at University of Havana through which she met several of her idols including Chilean poet Pablo Neruda (she knew all of his Veinte poemas de amor y una canción desesperada /Twenty Love Poems and a Song of Despair by memory); break things off with her lover; move back to New York in 1942 where she worked as a journalist for a time (wrote for Pueblos Hispanos); write more poetry; worked odd jobs to support herself when things were rough in New York; married again in 1944; moved to Washington DC (where de Burgos studied Portuguese among other studies); and in 1946 moved back to New York where she would remain until her death in 1953.

You only need read Jack Agüeros’s introduction in his Song of the Simple Truth: the complete poems of Julia de Burgos, and you are as entranced by de Burgos today as people were when she was alive. In it he provides reminiscences from people who knew her.

This is from José Emilio González:

I noticed this young woman, who stood out due to a stately air, and a characteristic beauty. Her personality imposed itself without our being able to determine what is was due to. It was and extraordinary presence…

Later, an anecdote from Don Jorge Font Saldaña (a publisher): he first describes her tallness, her unique physical beauty, her “eyes that looked as if they were trying to penetrate a person’s soul (she was all but 23 years old at the time), but when he succumbs to the intimidating silence emanating from de Burgos, partially due to the fact that he commented about her dyed hair (for which he did not like) he blurted out: “Where do you come from?” and she replied “Like you, from nowhere.” Touché.

She fell ill several times between 1946 and 1953, and was hospitalized several times including on Welfare Island (now Roosevelt Island). After collapsing on the street, she was taken to a nearby hospital and died of pneumonia. Not carrying any identification, de Burgos was one of the unlucky who ended up on Hart Island in the Bronx, a cemetery for people who have no money for burials and for unknown and unclaimed bodies. After about a month, her family and friends tracked down what happened to her. She was exhumed and returned to Carolina, Puerto Rico, where she is buried.

In Song, Agüeros translates every known poem by de Burgos into English and sets them side-by-side with the original poem in Spanish.

So let the poems speak for themselves…and for the brilliance of Julia de Burgos.

I Am Embodied in Now (Soy en cuerpo de ahora)

How this load of centuries wants to knock me down
that on my back drinks the current of time!
Time never changing that stagnates in the centuries
and that nurtures its body with past reflections.

I am afraid of the height of your ambitions—it tells me–;
the yesterday that nurtures me bends in the interior
of your simple life that admits no past
and that lives in the alive, open to the moment;
now the always nakedness of your mind angers me,
repels my load and expands in the new;
it confuses me now in the svelteness of your idea
that flagellates my face and straightens your body…
look to one side and another: hunchbacks, mediocrities;
they are mine, the ones who water my always full vacuum;
be one of them; untwist your vanguard; limp;
it’s so easy to flip from the live to the dead.

You have wanted to knock me down, load in the body of centuries
of prejudices, of hatreds, of passions, of jealousies.

You have wanted to knock me down with your heavy load
But I found myself, and your effort was in vain.

I am embodied in now; about yesterday I know nothing.
In the alive, my life knows the I Am of the new.

Soy en cuerpo de ahora (I Am Embodied in Now)

This poem was one of the two poems de Burgos wrote in English. I’m guessing the word play (farewell/welfare) in the title is one of the reasons. She was hospitalized at Goldwater Memorial Hospital on Welfare Island (now Roosevelt Island). De Burgos would die several months later.

It has to be from here,
right this instance,
my cry into the world.

Life was somewhere forgotten
and sought refuge in depths of tears
and sorrows
over this vast empire of solitude and darkness.

Where is the voice of freedom,
freedom to laugh,
to move
without the heavy phantom of despair?

Where is the form of beauty
unshaken in its veil simple and pure?
Where is the warmth of heaven
pouring its dreams of love in broken spirits?

It has to be from here,
right this instance,
my cry into the world.
My cry that is no more mine,
but hers and his forever,
the comrades of my silence,
the phantoms of my grave.

It has to be from here,
forgotten but unshaken,
among comrades of silence
deep into Welfare Island
my farewell to the world.