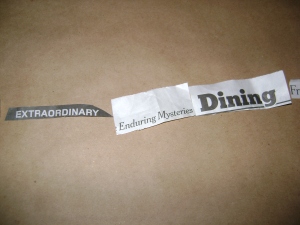 Eating healthy is easy if you have the know how and means (money and availability to healthy food) to do it. In Spanish Harlem, our food shopping/acquiring choices are simply not adequate. It’s basically a choice between a large supermarket filled primarily with processed and canned foods that are neither particularly wholesome or affordable or the local bodega that is great if you need a pint of milk, a roll toilet paper, or an egg and cheese sandwich.

The 106streeters are really lucky to be members of Community Supported Agriculture (CSA). Splitting a share with our neighbors, our weekly vegetable costs from June through October are way lower than at a grocery store (lower than even most of the non-organic produce) in NYC, and the quality of produce (all organic New York State produced veggies and herbs) is amazing (though you need to clean off some dirt and a few dead insects now and then). Using CSA as a model, Community Supported Kitchens (CSK) are popping up across the county. In Spanish Harlem, we are lucky to have an amazing CSK and neighbor, East Harlem CSK, founded by The Kitchen Table–an East Harlem-based community kitchen and parenting collective, who recently organized one of the most amazing events the 106streeters have been a part of in NYC.

In collaboration with Taller Boricua and Hatuey Ramos Fermin’s EAsT Harlem, the East Harlem CSK created a stir in the neighborhood when 50 or so people of varying ages, backgrounds, and ethnicities embarked on the Community Dinner and Foraging Tour led by artist and expert food forager Emcee C.M., Master of None (also known as Colin). Our first stop was a mere 30 feet from the front doors of the Julia de Burgos Latino Cultural Center (at 106th Street and Lexington) where the Taller Boricua galleries are located. In the small fenced in “green” area adjacent to the northeast corner of the building, we stopped and foraged our first edible plants–common plantain (cook it like spinach), dandelion greens (you’ve seen them all fancified on menus across the globe), and violet (eat the greens; the smaller, the less bitter). We collected the greens while Colin educated us about each one, dropping them into the blue bucket as we went along. Heading across 106th Street towards Central Park, we next stopped at a local playground near the Metro-North elevated tracks and found clover flowers (can be used to make tea) and pepper grass (tastes like wasabi and also called “poor man’s pepper). Heading under the Metro-North, our next stop was at the North end of the George Washington Carver Houses where we found a lovely assortment of edible stuff–wood sorrel (lemony; can make drinks from it), ladies thumb (pink flowers with a black “thumbprint” on the mature green leaves which are edible); lamb’s quarters, “cheeses” (the edible fruits look like little cheese wheels and you can also eat the young leaves). Some residents from the Carver Houses clearly took notice of the large group foraging through the overgrown “weeds” and one woman came over to find out what we were doing. Once informed, she took it in New York stride (which is yet another reason this city is amazing). Heading into Central Park (just past the Conservatory Garden and the Harlem Meer), Colin identified many edibles–bay berries (related to the bay leaf and can be used in soup like bay leaves; also can make candles out of the waxy berries), poke weed (an excellent cooking green that tastes like asparagus; Note: the entire plant becomes poisonous after it get one foot high or greater), Mugwort (has medicinal properties related to women’s reproductive system), garlic mustard (from the broccoli, kale, and cabbage family), either raspberries or blackberries (not ripe yet), and a lot more dandelion greens (which you can also roast the roots and make tea).

With our edible wild booty collected in our blue bucket, we headed back to the Julia de Burgos Cultural Center where we ate a seriously delicious meal including a quinoa, turkey, and cashew salad, a red bean salad, a variety of fresh brewed ice teas and a lovely green salad made from our foraged greens, dressed in an olive oil lemony dressing.

The event was organized by several people including Terry Rodriguez from The Kitchen Table and Denisse Andrade, among others. The night finished with the five or so groups who randomly sat together at tables for dinner working on creating a sentence composed of random words culled from newspapers and picked from a hat. Beats the hell out of Scrabble and day!

The poster for the event, plus some foraging and post-foraging photographs: 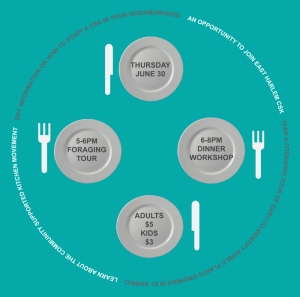 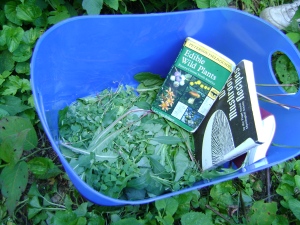 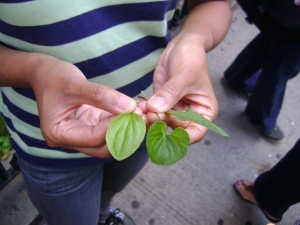 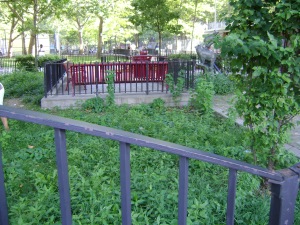 Field of greens outside the Carver Houses. C. Nelson, 2011. 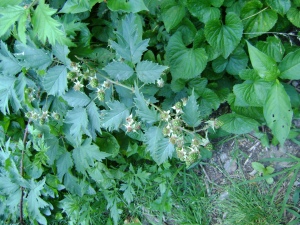 The salad made with foraged greens in East Harlem. C. Nelson, 2011.