Walking in a Winter Wonderland (aka Central Park) 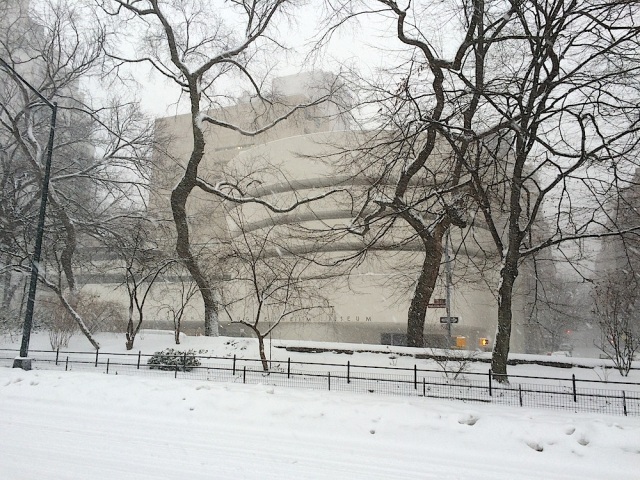 As the blizzard of 2015 began its descent on New York, we ventured into Central Park to snap a few photos before the storm really took hold. Winter sensation Juno is supposed to wreak havoc across the region. But until the winds kick up and dozens of inches of snow fall on the ground, we’ll enjoy the peaceful and quiet city. After all, these moments only come around every decade. Snowmageddon…bring it on!

The iron gates of the Conservatory Gardens. Photo: Patricia Glowinski

Blue skies over Place de la République, where people came together after the attacks on January 7.

I was lucky enough to visit Paris near the end of last year. It was only my fourth time in the City of Light, but somehow I always feel at home there. My French is horrible, but that doesn’t stop me from roaming the streets, getting  a little lost and seeing what I stumble across. This trip included tasty crepes at Marché des Enfants Rouges, an evening with new friends at La Belle Hortense (a cozy wine bar/bookshop) and a catching a film at the old-school cinema Le Desperado. A few times I even shut off my iPhone and left my map at the hotel to see where I would end up. Exploring with no plan at all, I managed to wander through a Julie Delpy film shoot near Place de la République and a Karl Lagerfeld-Gisele photo session in the Latin Quarter…on the same day!

Just like in New York, walking through the city streets of Paris gives you a feeling of being truly alive. The urban energy, the architecture, the food and wine, it’s all perfect. I’ve been meaning to put up my photos since I came back, and with the horrible events of last week, it seems like the right time to share my love of Paris.

My room with a view from Hotel Tiquetonne. Photo: Craig Nelson 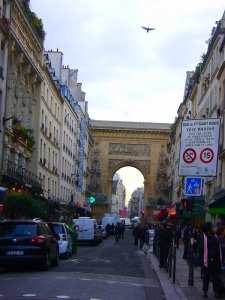 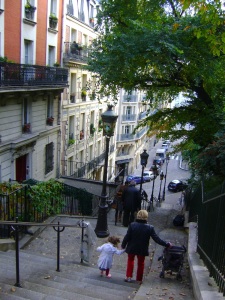 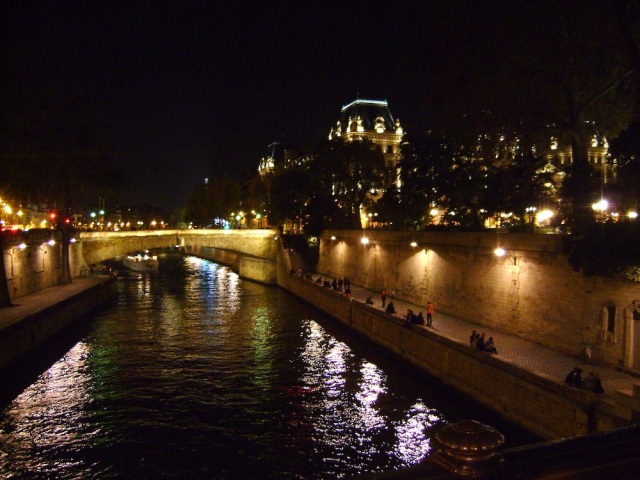 Hanging out along the Seine at night. Photo: Craig Nelson 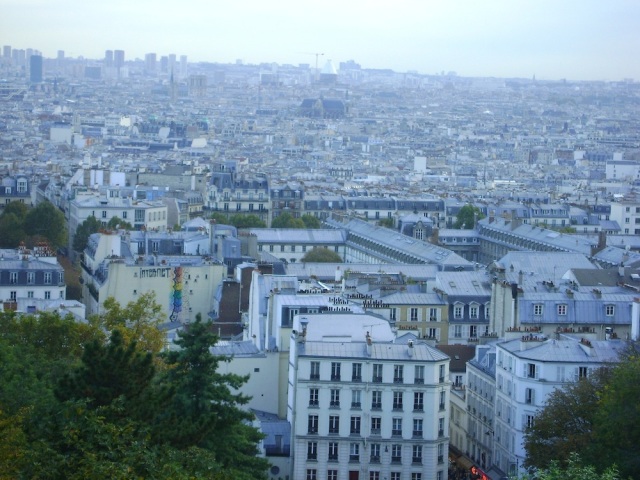 The city sprawling out from Sacre Coeur. Photo: Craig Nelson 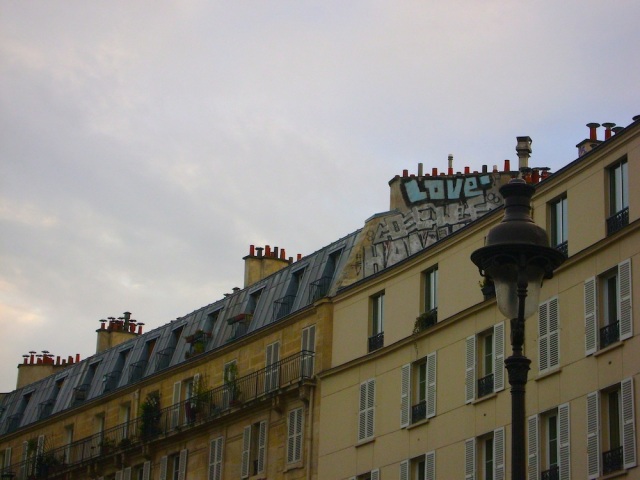 Sun breaking through over the Eiffel Tower. Photo: Craig Nelson

Holiday Cheer Along The Harlem Meer

The Harlem Meer all lit up for the holidays. Photo: Craig Nelson

Everyone knows about the charms of Rockefeller Center and Radio City Music Hall at Christmas time, especially the famous spruce that attracts millions of onlookers. But did you know New York City is also home to a “floating” Christmas tree? Not many people make it up to the north section of Central Park, but if you venture to the Harlem Meer  after the sun goes down, you’ll find a festive holiday landscape without the crowds. In early December the park strings up lights on the Charles A. Dana Discovery Center and decorates a tree to place it out in the middle of the water. It’s actually multiple trees (17 to be exact) tied together to give it a heftier effect. If the temperatures aren’t too cold, there are plenty of benches to relax on. It all makes for a lovely scene that feels so peaceful, it’s hard to believe you’re in the middle of the city with Fifth Avenue and 110th Street just a few feet away!

The floating tree reflecting off the meer. Photo: Craig Nelson

Another peaceful evening in December along the Harlem Meer. Photo: Craig Nelson 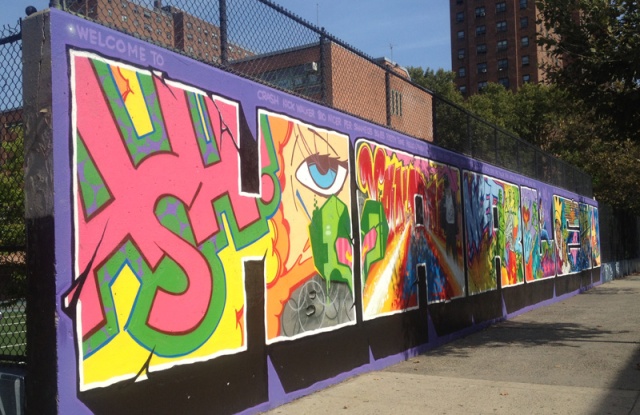 One of the highlights of living in East Harlem is all of the street art on view, and I always look forward to walking by The Graffiti Hall of Fame (at 106th and Park) on the way to Central Park. The murals change a few times a year, and recently over Labor Day weekend, a new batch of freshly painted graffiti went up. The art is always mind-blowing, but this time the TatsCru captured a slice of the neighborhood across an entire wall in a totally unique way. Here’s an up-close look at each letter. 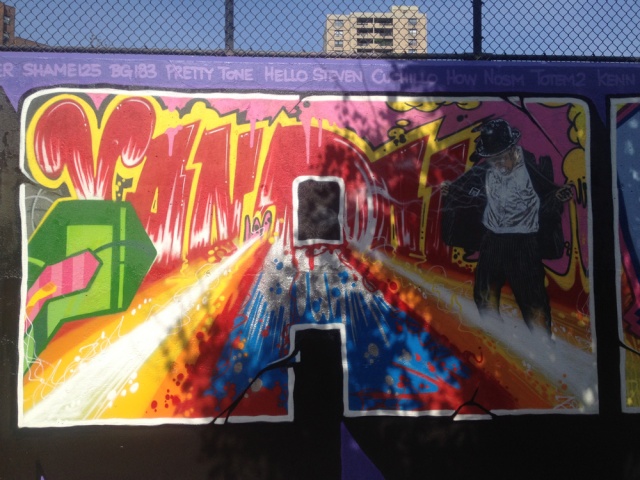 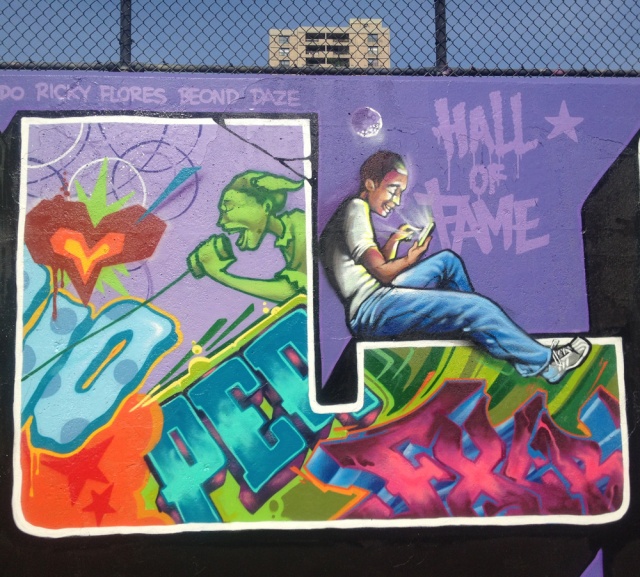 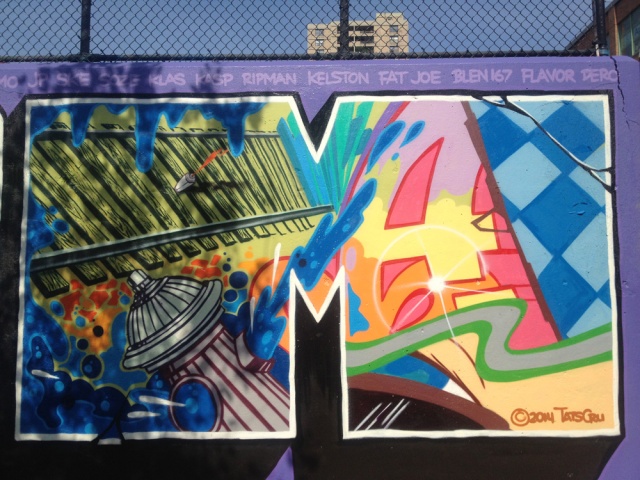 Beats For Your Week – Bobby Womack

We here at Across 106th Street have to show our respect and love for the great Bobby Womack who died on Friday, June 27, 2014. We hope that Womack knew how much his music meant to so many people around the world, including these two 106thstreeters who loved the music so much it inspired the name for this blog. Though 110th Street may not be such a hell of a tester these days, it remains one of main arteries pulsing through the heart of East Harlem. And as always in New York City, you’ve still got to be strong if you want to survive. Live on Bobby Womack.

Di Fara: The Pizza Served in Heaven (or at least Midwood)

Pizza perfection: The first pie out of the oven on the day we visited Di Fara. Craig Nelson, 2014.

If you know anything about pizza or New York, then you’ve heard of Di Fara Pizza. Located way out on Avenue J, it’s a trek for those without a car coming from Manhattan. The line is always ridiculous with waits of up to two hours, and a whole pie will set you back a hefty $28. So why I am even writing these words? Because, if you’ve never been, you’re missing out on one of the best culinary adventures in the city. Take a sick day, rent a car, bring along a few hungry (and very patient) friends…do whatever you have to do to make a visit to this temple of pizza at least once.

The thing about Di Fara that makes it so special, is that Dom DeMarco (the owner and chef) has been making pizza the same way since the 1960s. Other than the price, he didn’t change anything once the massive amounts of press started to arrive declaring his spot one of the best pies on the planet. He still carefully crafts each pie by hand and never rushes his technique. It can be painfully slow to observe him at work. Or a completely transforming religious experience depending on your viewpoint. You can guess which camp I fall into. And that’s the beauty of being there in person to witness Dom perform his magic. In today’s world, where so many food experiences are now perfectly manicured at an ever quickening pace, Dom just keeps it old-school so that every pizza is a unique work of art. Case in point: he pulls the pizzas out of the oven with his bare hands and cuts fresh basil over every fresh-out-of-the-oven pie for a final, perfect touch. It’s not a magic trick or a show. It’s just what he does, and no one does it better.

A beacon for pizza lovers around the world. Craig Nelson, 2014.

The same ovens have been in use since Di Fara first opened their doors. Craig Nelson, 2014.

Even the working pizza station is a thing of beauty and looks likes a museum exhibit. Craig Nelson, 2014.

The pizza master, Dom DeMarco, making a pizza next to a painting of him at work. Craig Nelson, 2014. 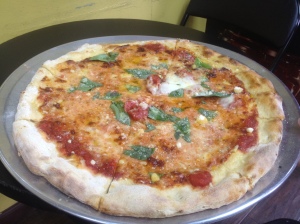 For all things Di Fara, check out this great post from the pizza blog Slice. Or watch this great film from 2010:

The Best Thing I Ever Done from M Emily MacKenzie on Vimeo.

Bagels galore fresh out of the oven at Absolute on the Upper West Side. Craig Nelson, 2013.

It’s a debate that never ends: Who makes the best bagels in New York City? Everyone has their favorite, but opinions can get heated. But that’s the fun of the New York bagel obsession. Although it’s getting harder and harder to find top quality bagel shops, I recently researched and wrote a roundup article for NewYork.com called “The 16 Best New York City Bagels and What Makes ‘Em So Good.”  It was a fun assignment where I was able to dive deep into the history of the bagel, how they are made, and best of all, put the challenge to the ultimate test–what is the best tasting bagel in the city. Although, it’s hard to choose an ultimate favorite, right now I’m on an Absolute Bagels and Ess-a-Bagel kick. But that could change at any second. What are your favorite spots to pick up a bagel? 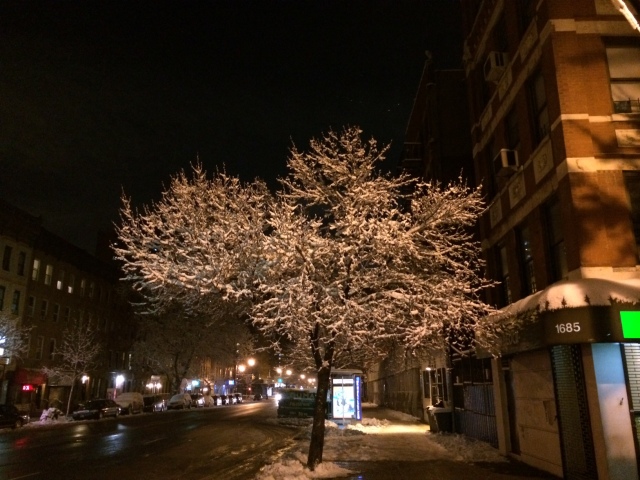 A snowy tree transforms a normal block into a thing of beauty. Craig Nelson, 2014.

When you’ve lived in a neighborhood for several years, you start to really notice the small details–a colorful doorway, a stunning mural, a flower in a window, the friendly octogerian guy sweeping the sidewalk. But sometimes it takes a jolt in the norm to bring to life some things you’ve never noticed. This happened this week with the snowstorm that swept through. It was nothing compared to ThunderSnow a few years back, but the powder was damp, and it clung to everything it came in contact with, including all of the trees in East Harlem. I had walked by many of these trees around Lexington Avenue hundreds, if not thousands, of times, yet I never noticed how big or even beautiful they could be. Living in the city, you tend to inhale nature in places like Central Park and leave more leafy scenes to blocks in Park Slope or the Upper West Side. East Harlem, you have surprised me again.

Winter in the city creates all sorts of challenges from slippery black ice to chilly waits for the bus. But the invigorating cold air also brings out a special beauty in New York that you won’t experience any other time of year. (Just watch this stunning video to get a glimpse.) Along the Metro-North viaduct, running through the heart of East Harlem, freezing temps bring another reality of winter: giant icicles hanging from the walls. Metro-North chugs along underground in the Park Avenue Tunnel until it hits 97th Street, where it rushes out onto elevated tracks up to 125th Street and beyond. The stone viaduct with handcrafted masonry has pedestrian and automobile passageways that drip moisture in the warmer months and freeze up come winter. When the temperatures drop again and the ice daggers start to melt, walking through is a beautiful and dangerous experience. Don’t linger too long! 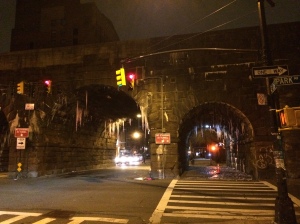 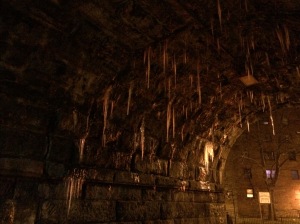 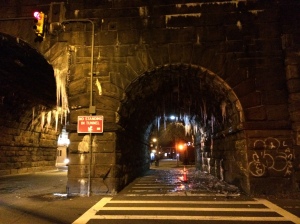 Behind the Scenes at Radio City Music Hall

The talented Rockettes might be the main attraction at Radio City Music Hall during the holidays, but the space itself is a true wonder. Stunning Art Deco details are everywhere you look, and just walking into the dramatic lobby can take your breath away. The first thing you’ll see is a gigantic 35-foot Christmas tree chandelier made out of Swarovski crystal. But don’t forget to look down at the intricate carpet detailing, the “Fountain of Youth” mural by Ezra Winter on the stairway, and the classic signage above the doors. If you want to see the highlights without the crowds, take the Stage Door Tour. An expert guide will fill you in on the storied history of the building as you tour the beautiful men’s and women’s lounges and watch the performers warming up on stage. Oh yeah, you also get to meet a real-life Rockette in person. There are no high kicks involved, but you can ask a few questions to get a sense of what life is like as a famous New York icon. That’s worth the price of admission alone.

Want to enjoy other unique experiences in New York City? Take a tour with Bowery Boys Walks to explore NoHo, Central Park, Broadway, and other spots in the Big Apple.

The beautiful walls of the concert hall. C. Nelson, 2013. 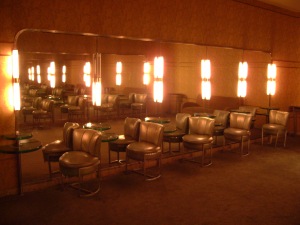